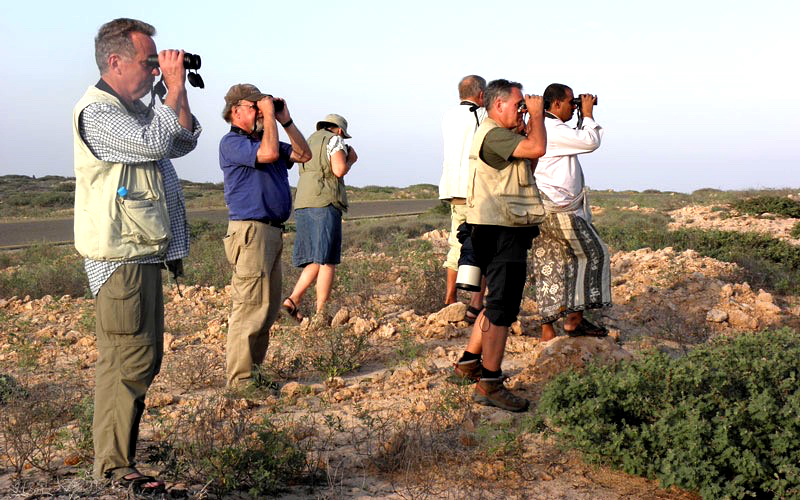 Birdlife on Socotra is rich of a large number of resident, endemic and migrant birds which arrive to the island during winter and summer, of which waders and other coastal birds make up a significant proportion like Grey Heron, Reef Heron, Flamingoes, Backed Sooty-gull, Black-Winged Stilt. Watching bird lovers will be able to discover the 10 endemic birds by one week on Socotra through experienced bird guides. The sites where you will find the most birds are Ayhaft Canyon, Deham and Dixam plateau. Some birds can be watched in Wadi Denegen such as Socotra Sunbird and Socotra Sparrow which are common in this area, and Golden-Winged Grosbeak and Socotra Starling are both present, though the latter is well-outnumbered by the ubiquitous Somali Starling.
Wadi Shoq, lying to the east of the Qrahan lagoon, has a number of date palm plantations, which are a good locality for Socotra Scops-Owl. Some of the taller palms hold wintering Black-Crowned Night Heron, a relatively scarce species on Socotra. This excellent and verdant wadi lies about an hour’s drive from Hadibo. The habitat contains good numbers of large trees, and this is easily the best locality we visited for finding Golden-Winged Grosbeak, and well as Socotra Sunbird in good numbers. Socotra Bunting is sometimes recorded from higher sections of the track. The road terminates at a small settlement, around which Socotra Warbler can be found, Socotra Starling is also present in the area.