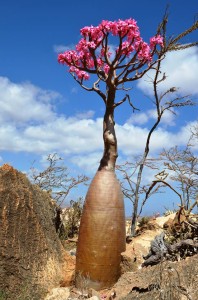 At the crossroad between Africa and Arabia, Socotra Archipelago boasts a remarkable and absolutely unique biodiversity. Of the over 835 known plant species on the islands, at least 310 are endemic, thriving nowhere else on earth.

The Islands were renowned since the antiquity for the trade of the resins of three very important plant: Aloe, Dragon’s Blood and Frankincense.

Socotra has been preserved by United Nation Development Program, and has been declared a WWF global 200 Ecoregion, a plant life international Center of plant Diversity, included in The Horn of Africa Biodiversity Hotspot zone. All these added to designation of UNESCO Word Heritage Site and UNESCO man and Biosphere Reserve.

There are three species among the most appealing to many people as Dracaena cinnabari, the Dragoon’s blood tree, the unique desert rose as pictured opposite but Socotra archipelago has also some remarkable beautiful smaller plants including succulent such as Caralluma socotrana and five endemic species of aloes.

We want to draw your attention here, if you are interested in botanic, let us know in order to book for you an English speaking guide who has enough knowledge about plants and where to find them.

The use of Dragoon Blood Tree: the resin the most major export from the island a part spice trade of the region. It was used as varnish and dye as incense and body oil. Dragon’s blood was also in demand for numerous medicinal purposes, including as coagulant, a fever reducer and to treat ulcers, diarrhea, and dysentery and skin condition. It is still used today as medicinal purpose and also used as decoration Socotri handcraft.

You can refer to this book for botanic detailed information: Ethnoflora of the Socotra Archipelago written by Anthony Miller and Miranda Morris (2004).